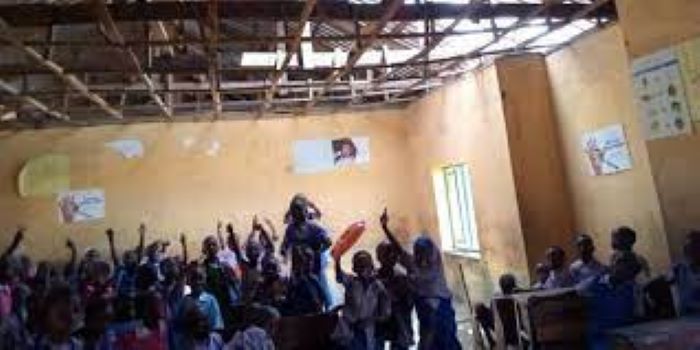 Children of the Dobi community at Gwagwalada Area Council of Abuja the Nigeria capital city are learning under the rain as their classroom roof has been removed by a wind storm, making rain pour on them during classes.

On a visit to the LEA Primary School which has an estimated 400 pupils, children were seen learning under a scorching sun because their classroom roof has since been removed by a wind storm. They, however, recounted how they learn under the rain as well.

Mr. Usman, a community champion who spoke to MAWA about the deplorable condition of the school, says the school has continued to be this terrible despite the N3, 500 collected by the authority as Parents Teachers Association (PTA) fees from each of the pupils.

Mr.  Usama, however, said it is unclear how the school management deploys the PTA fees it collects regarding taking care of its maintenance. This is even as he pointed out that teachers in the school that are about 10 in number are all being paid by the government. A situation that gives room for the school authority to deploy the PTA fees in fixing the classroom roof for the kids to have a decent learning environment.

Mr. Usman, who claims to have monitored many public schools across Gwagwalada Area Council, described the condition of schools in many communities as highly deplorable that needs government intervention to be addressed.

The Dobi community school has continued to be this deplorable even as the Federal Capital Territory Administration (FCTA) and Gwagwalada Area Council, in the last 10 years claimed to have expended a huge amount of money on education.

The implication is that, if the FCTA and Gwagwalada Area Council continue to allow public schools to be this deplorable, many children in the rural areas, particularly those from poor homes will be denied access to quality education. And, this has a dire consequence on the nation’s development.

If schools in Abuja and other communities in Nigeria are allowed to be in this deplorable condition, Nigeria’s chances of achieving SDGs goal 4 (quality education) will be very much impossible.

A primary School teacher in one of the schools in Gwagwalada Area Council who spoke to MAWA and wants his identity concealed, described public primary and secondary schools in the Area Council as hugely deplorable and below standard.

According to him, virtually all the Primary and Secondary Schools located in the rural areas of Abuja are in deplorable condition and do not fit a conducive environment for decent learning.

MAWA-Foundation could not immediately reach out to Gwagwalada Area Council Authority for an official response.