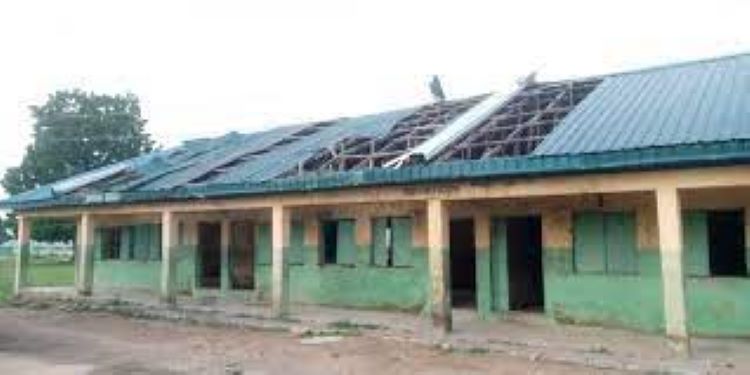 Parents in the Paikon Kore community at Gwagwalada Area Council of Federal Capital Territory Abuja, the Nigerian capital city, are groaning over the dilapidated condition of a school in their area, pointing out it can longer deliver quality education to their children.

The dilapidated Junior Secondary School Paikon Kore that has since become this dilapidated was established in 2005.

On a visit to the school, one sees classroom blocks that have their roofs blown off by the wind, while residents say they have been in that condition for over 6 months.

Mr. Usman, a community champion who spoke to MAWA about the school, says parents are worried that if it is allowed to be this dilapidated, their kids may not have school to attend after the holidays.

Usman who claims to have visited many schools in Gwagwalada, says virtually all of them are in dilapidated condition and wonders why the government will allow this kind of decaying education system.

In a common narrative, three parents who spoke to MAWA about the school, say it is unclear why the FCT authority and the school management will allow it to become this dilapidated.

They accused the government of allowing the school to become dilapidated because it serves only children of the poor.

“Many public schools in Gwagwalada are in dilapidated condition, the government does not care because they serve children of the poor”, the parents told MAWA.

Public schools in FCT-Abuja continue to be in terrible condition after the Federal Capital Territory Administration (FCTA) claims to have allocated N280.529 billion allocation to fund education in the last nine years.

Data from Education Secretariat shows that the FCTA in nine years, from 2007 to 2016 spent the sum of N280.529 billion allocation on education.

“If not corruption, how do you explain that N280.529 billion was allocated to education in FCT in nine years, and all the public schools are in a deplorable state, no, that can only happen in a corrupt system like ours,” Peter Angai said.

Another parent, Mrs. Patricia Onam, described the deplorable state of public schools in Abuja and said it is difficult to believe N280.529 billion was spent on education in 9 years.

“How do you want any reasonable person to believe that N280.529 billion was expended on education in FCT in the last few years and you still have these kinds of dilapidated schools all over FCT, that is unimaginable,” Onam said.