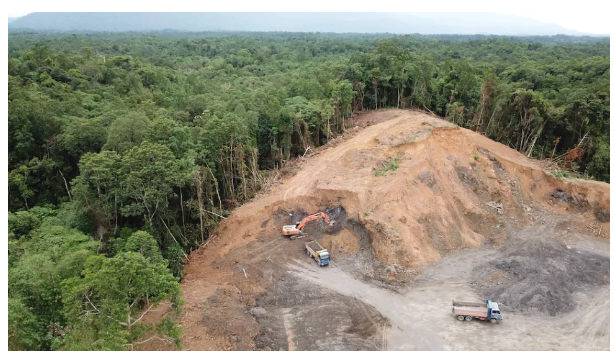 Odolu Community in Igalamela Local Government Area of Kogi State has lost a huge portion of its forest to deforestation, leading to unprecedented biodiversity loss. And, as a result of that animals that rely on it for their habits are no longer found while the forest is facing extinction.

The forest that stretches from Igabada to Odolu communities lost about 103 hectares of its coverage to deforestation masterminded by illegal loggers between 2000 and 2021.

Even as the forest faces extinction as a result of illegal loggers, it receives no media reportage. Mainly because, in Nigeria, there is a huge deficit of media reports taking a comprehensive look at the link between forest deforestation, biodiversity, and its impact on climate change.

Illegal loggers have begun cutting trees in the forest on a massive scale as far back as 2000, the locals told MAWA Foundation.

A community leader who wants his identity concealed disclosed that immediately after loggers discovered that the forest possesses the kind of wood that is wanted in the market by timber dealers, they invaded the forest and dissipated it to almost zero level.

“As far back as 2000, illegal loggers invaded our forest and have dissipated it to nothing, with animals and vegetation being the most affected.

Miss Ele Shaibu, a community resident who is not happy over the forest disappearance, speaking in an angry tone, said at first they had believed that illegal logging was a good business because the loggers were always patronizing their businesses. But, as time goes on, they discovered that the activities are causing environmental damage leading to the loss of biodiversity with fish and their water disappearing.

“At first we thought logging activities in our community is best for us because the loggers come with money to patronize our businesses, but we later found out that fishes in our rivers are dying”, Shaibu said.

Mrs. Danjuma, a community resident while lamenting the disappearance of the forest, told MAWA that as of 15 years ago, many animals were found in it, but are no more as a result of massive illegal logging that has hugely impacted it.

“Before now, we do not stress to catch fish from our rivers, but as of today, it takes almost a whole day to catch a fish, this has been the situation since illegal loggers invaded and destroyed our forest,” Danjuma said.

The Odolu forest is undergoing unprecedented deforestation even as the Kogi State government recently inaugurated Forest Guard that has the mandate to protest forests located all over the state.

However, with the huge deforestation and biodiversity loss in the Odolu forest, it is unclear how the state Forest Guards are carrying out their duties.

MAWA Foundation, could not immediately reach out to the Kogi State Government for an official response.

However, a senior official from the state ministry of environment who wants his identity concealed because he is not permitted to speak on the issue, told MAWA foundation that the state does not take issues of forest deforestation and environmental safety seriously.