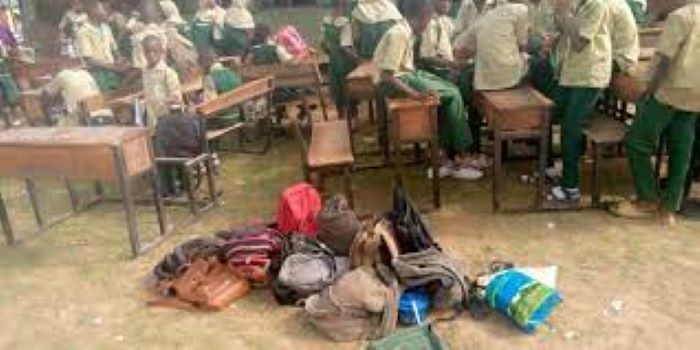 Students of Junior Secondary School Dupka at Gwagwalada Area Council of Federal Capital Territory (FCT) are learning under the sun as a result of the dilapidated condition of the school.

On a visit to the school, one see collapsed classrooms with the environment looking dilapidated. A situation that has forced many of the students to learn under the sun and rain outside the classrooms.

A teacher in Gwagwalada who spoke to MAWA and wants his identity concealed, described the school as a collapsing structure while calling on the FCT Authority to immediately intervene and save it from collapse.

“As a teacher who heads one of the schools in Gwagwalada, Junior Secondary School Dupka is better compared to others, it is annoying that the government will allow public schools to become this deplorable”.

Mr. Usman Mohammed, a community champion, who claims to have visited many schools in the Gwagwalada Area Council, described Dukpa School as highly deplorable.

The implication is that, if the FCTA and Gwagwalada Area Council continue to allow public schools to be this deplorable, many children in the rural areas, particularly those from poor homes will be denied access to quality education. And, this has a dire consequence on the nation’s development.

If schools in FCT and other communities in Nigeria are allowed to be in this deplorable condition, Nigeria’s chances of achieving SDGs goal 4 (quality education) will be very much impossible.

A primary School teacher last week while speaking to MAWA, about the deplorable condition of public schools in Gwagwalada, described public primary and secondary schools in the Area Council as hugely despicable and below standard.

According to him, virtually all the Primary and Secondary Schools located in the rural areas of FCT are in deplorable condition. They do not fit into a conducive environment for decent learning.

MAWA-Foundation could not immediately reach out to Gwagwalada Area Council Authority for an official response.