Residents of Gwantu in the Sanga Local Government Area of Kaduna, have continued to suffer a lack of healthcare delivery as a General Hospital in the area is in a deplorable condition.

This is the terrible condition of Gwantu General hospital, even as the Kaduna state government in her 2021 budget approved N39.3 billion for health expenditure.

Gwantu community is about 113 kilometres away from Kaduna the state capital. The community is one of the largest in Sanga Local Government that has an estimated 151,485 populations with the majority of inhabitants farmers and traders.

Mr. Ambrose Nuhu, a Kaduna resident has since raised an alarm over the deplorable condition of Gwantu General Hospital while appealing to the state government to help in improving its despicable condition.

Corroborating Nuhu, some of the residents accused the state government of allowing the Gwantu General Hospital to become deplorable by not bringing governance to the people at the local level.

“The government has totally distanced itself from the grassroots, they believe people in the rural areas deserve no dividends of democracy. The people only count as numeric to hoodwink lenders whenever they want to borrow money”. Mr. Bello Sarki said.

Miss Ruth Micah, who has a good knowledge of the hospital right from her secondary school days, felt pity for the people and wishes the government comes to assist them in revitalizing it.

“This hospital used to be our photos studio as a secondary student about 26 years ago. So sad. I pray this gets to the right people” Miss Ruth Micah said.

Mr. Moses Giggs Abeku, narrated how he took his son to the hospital last year and found that some patients were rejected on admission because there was no space to keep them. This is even as he pointed out that the residents go through hell in search of healthcare as a result of the deplorable nature of the hospital. And, according to him, the situation becomes worse during the rainy season.

“My fellow Sanga people, please let’s leave politics aside and face reality. We’re the people staying at home, we know what we are passing through regarding the issue of this general hospital”, Moses Giggs Abeku said.

If Gwandu General hospital is allowed to continue in this deplorable condition, a huge population that depends on it for healthcare will suffer healthcare delivery. And, the implication is a likelihood of a maternal and infant mortality rate hike. A development that has become common in Nigeria and needs urgent reversal if the country will meet sustainable Development Goals- SDGs (Goal 3: Good Health and Well-being).

Out of the N39.340 billion approved health expenditure by the Kaduna State government, the ministry of health got N15.8 billion.

In the total sum approved for health by the Kaduna state government, Kaduna State Primary Health Development Agency, an agency directly involved in the development of community hospitals, got N11.3 billion in just one year-(2021).

Another agency, Kaduna State Drugs and Medical Supplies Management Agency, with the direct responsibility of ensuring medicines, are made available to hospitals got N1.7 billion.

The deplorable nature of Gwantu General Hospital leaves one in doubt about how the Kaduna state government had deployed and utilized its health funds in the last decades.

Gwantu community is not an exception, across communities in Nigeria, there are many examples of terribly dilapidated hospitals.

In most rural communities, there are no hospitals, making it impossible for inhabitants to access health care service delivery with some of them dying of sicknesses that can easily be cured.

And, this, lack of health care delivery in rural communities, contribute hugely to infant and maternal deaths in the country.

Clearly, if the Kaduna state government, had released and judiciously utilized the N39.3 billion approved for health in 2021 alone, the Gwantu community will have a better hospital that will deliver quality health care to the inhabitants.

MAWA Foundation could not immediately reach out to the Kaduna State Government for an official response. 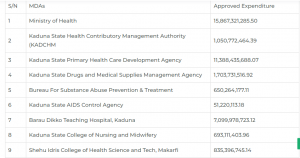